Sorcerer's Cave is a fun Windows turn-based fantasy-themed board game similar to HeroQuest. Originally a board game, this PC version is coded by the designer himself, who released this Windows version as shareware in 1995, and later as freeware which you can download from the official site.

The game, in the designer's own words, is "...a simple, fast-paced "dungeon crawl" based on the author's popular card game, once called "the best game since Diplomacy". You form an exploring party and enter a six-level cave full of treasures, creatures, and traps. Try to make friends, defeat enemies, and steal as much booty as you can carry. The game can be played in less than half an hour and is equally enjoyable for children and adults. The game has 35 types of characters, treasures, and magical artifacts and allows you to set the size of the Cave and the occurrence of stairs. For Windows (256 colors). On-line Help."

The PC version retains all the fun of the original board game, including the real feeling of exploration as you never knew what to expect on the next tile. It is definitely better than the board game in one respect: you will never run out of space to lay new tiles :) Although the basic mechanics are simple, there is enough variety to make the trip worth taking. As you explore and go down the levels, more allies will join you, and you will find better weapons and magical artifacts. If you are looking for a turn-based, simplified version of D&D that offers plenty of exploration, surprises, and good old monster-bashing goodness, check out this fun game that is now free of charge thanks to the author. 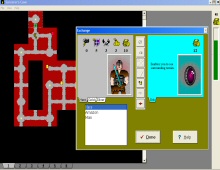