HeroQuest is a superb fanmade PC version of Milton Bradley and Games Workshop's popular but now out-of-print boardgame of the same name. In this turn-based board game in a fantasy setting, you can play with 1 to 4 players in hotseat mode (i.e. the same computer). Designed primarily with kids in mind, the rules of HeroQuest are easy to learn, but the game is a lot of fun, thanks to cool-looking miniatures and solid atmosphere. The game could be described as a "light adventure board game" : don't expect the depth or variety of an actual RPG.

Your goal in HeroQuest is simply to take on quests, most of which involve defeating a certain monster. You can use four characters; a barbarian, dwarf, elf and wizard, each of whom is slightly different: For example, the barbarian can take the most damage and starts with a powerful weapon, but has no special skills. The dwarf is not quite as tough as the barbarian, but can disarm traps. The elf is still less tough, but can cast 3 spells. The wizard is not a good fighter at all, but gets 9 spells to use. The game takes place on a large gameboard divided into squares, with some rooms and corridors outlined on it. As you move around, you will come across doors, other furnitures, treasures, and monsters placed by the computer player (taking the role of evil wizard) places objects they can see onto the board. Movement is determined by die toss.

Combat is very easy to resolve. Each hero and monster rolls a certain number of attack and defend dice. On an attack, every die showing a skull is a hit. When defending, every die showing a shield (white for heroes, black for monsters) is a block. An attacked character takes 1 point of damage for every unblocked skull. Monsters take 1-3 points of damage to kill, while heroes take 4-8. As you explore the dungeon, you may find treasures that can improve your heroes' abilities or give one time bonuses.

This fanmade PC version is very faithful to the board game, and sports much more attractive SVGA graphics and a more intuitive interface than Gremlin's 1992 officially licensed game. Although the latest version reviewed here (2.07) is still missing some elements of the original board game (most notably the ability to cast magic spells, search for treasures, and search for secret doors or traps), it already offers significant play value. You can play all of the quests from the original board game, and play in the very cool "Magic Dungeon" that is randomly generated every time you play, thereby boosting playability significantly. You can also use the included level editor to design your own quests. If you love the original board game or want to try a "lite" turn-based strategy game, check out this very well-designed game that keeps the HeroQuest spirit alive. 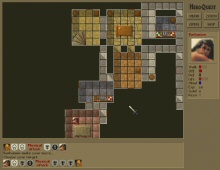