Classical board game. If You ever played Hero's Quest or Space Crusade by MB Games (board games), then You probably know everything about this computer game. On the other side, if You haven't then here are some words about it. You have to choose a character (barbarian, magic user, dwarf...) and in cooperation with other players (or even solo) try to complete a mission: escape from dungeon, kill a monster, find an item,... The evil wizard and his troops will try to stop You so You'll have to deal with them. Nice, but it could have been even better.

Gremlin did well when they converted this classic board game to the PC. Not only have they managed to include pretty much everything from the board version but it also looks very nice all the way. Especially the interface and controls are very easy and you just have to use your mouse very little in order to make the different things you can do in the game.

You start the game by selecting between the different characters like the human warrior or dwarf warrior. After that you start at the first mission. All the missions are somewhat related to each other although you might only be able to see this until you are getting nearer the last few missions. You can play more than one player at a time which will make the game a bit easier overall although you won't be able to work that much together since human players will almost all the time start far from each other on the map. The combat system is fairly simple using dices to "calculate" the result of each hit you and your enemies launches. After each mission you can buy better weapons etc. from the gold you might have collected during the last mission or from the bounty you have received for completing the last mission.

The entire game is divided up in small fields where you will be able to a max of 12 fields each turn but decided in the number you start with on each round (decided randomly). When walking around you can search for traps, hidden items or secret door. It is recommended to search every room you enter if you can since you will often something although it can be monsters as well. A well-done game and if you have tried the board version you will notice a lot of similarities. A well-done job by the developers.

An adaption of the well known boardgame Hero Quest (you wouldn't have guessed!). While not being a REAL RPG the (board-)game ranked somewhere near that genre and attracted especially those who where not quite into it - RPG light you could say... Now, what we have here is a (Computer-)RPG, that's made up very much like the original boardgame (actually I never owned it, so please don't send any angry e-mails if I'm wrong), you select your "missions" before you play them, so you can choose how to build up your character. Well, sure good fun, but nothing for those Hardcore-RPG-Fans amongst you, maybe a game for yer little brother ;-) Nice choice for a first look into the genre I think.

You should also really consider playing the Amiga-Version, while the graphic might not be that much better the sound is - overall it has a lot more atmosphere than the PC-Version.

A great PC version of the equally underrated board game of the same name from Games Workshop, Hero Quest is an isometric RPG that simplifies RPG statistics without simplifying gameplay. As in the board game, up to 5 players can play the game as wizard, elf, barbarian or dwarf in a quest to banish the evil wizard. Secret doors, traps and treasure abound in this turn-based, mission-based game. Good game in every respect and severely underrated. Those who like this game should also try Space Crusade another Games Workshop boardgame conversion based on the much-improved version of the game engine.

Hero Quest (along with Space Crusade) was Games Workshop's attempt to gain a foothold in the mainstream board games market. After an extensive advertising campaign the games and there add-ons gained a fair bit of popularity and it was inevitable that computerised version would be released.

Sooooooo horrible things have befallen the land. Plague, pestilence, fire, brimstone, gophers. In times like this who are you gonna call? A barbarian, a dwarf, an elf and a wizard that's who dagnabbit! Our party must enter the terrible dungeons of Morcar and complete 15 quests, each more horrible and sticky than the last. Find treasure, kill green things and rescue people who are too retarded to rescue themselves.

Each character can be controlled in turn by a different player. Each starts in a separate corner of the dungeon/board, after a random dice roll to determine the order of play its off we go and each little spod goes and does whatever thing that heroes do (rescuing maidens and headbutting orcs I should imagine).

Play goes like this - each character gets one movement and one action per turn. The amount of movement depends on the value that the player has rolled (with a dice.. go figure) and action is carried out before or after each movement. Actions are fighting, casting spells, disarming traps searching for treasure.. that type of thing. The dungeon consists of rooms and passages, with the contents of each room unknown to the player, who must search them using their actions.

Monsters - yep, the dungeon contains nasty things that want to hurt you. Goblins, Orcs, Skeletons, Chaos Warriors (my favourite) all intent on being mean to you =( Each player/monster has body points and mind points. The dwarf and barbarian are dumb but strong, while the elf and wizard are weedy but brainy. As a general rule of thumb high mind points means that you can do magic, and high body points means that you can hit things in the face... hard. The amount of points available to each player can be changed with various potions found in the dungeon... or obviously by walking face first into a trap.

At the end of each quest you get to spend all that lovely treasure that you found (you did find some right?) and buy swords, shields and spells to aid in your quest. 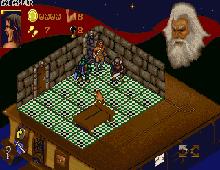