When I was about 13 years old, my cousin bought a board game called "Space Crusade". It was not available here, so it was pretty unique for us. We learned all the rules and played it for ages! It really is something. What we have here now is computer version of this great game. Space Crusade is set in the well known Warhammer 40.000 series in the world of Space marines, Orks, Gretchins and Legions of Chaos. In the game, You control a group of Space Marines, specially trained squadrons for Alien termination. You will get a mission, 4 marines and a commander and some equipment. Board the enemy ship, eliminate the opposition and complete the mission.

Space Crusade is based on the popular board game by Games Workshop. The time is around 40.000, which means that the game is of course taking place in the popular fantasy game Warhammer 40.000 (also known as Warhammer 40K). Games like Warhammer: Final Liberation and Space Hulk are other games taking place in the same period. You control a crew of different space marines that have to fight against other enemies including other space marines at different places including several old space marine outposts.

It is obvious that the game is based on an actual board game as the game area is divided up into small fields and each of your men can only move a certain amount of times before they have to wait until you get a new turn again. At first you might have problem with finding out how to control your men and how the different functions work so if you already know the board game that is a big help. Unlike a game like Space Hulk all action is turn based which really is my personal preference but of course I also think it should be it when the board game is (kind of hard having real-time action in a board game don't you think?). There are a few flaws in the movement process though but otherwise the original game has been followed quite well and the conversion from the board game to the PC format has gone quite good.

The graphics are quite good and well detailed meaning that you have a good over of the entire game. Of course the game screen could have been a bit longer from your men, which would result in a broader view of the entire game area. The sound included fits well to the game but overall Space Crusade could have been better and it would have helped a lot if their had been some kind of story or at least an extensive game intro. It is still a nice game but not much more than that.

Space Crusade is a follow-up of sorts to Gremlin's underrated Hero Quest. Like its predecessor, Space Crusade is an excellent tactical turn-based wargame based on a Games Workshop boardgame, this time the more famous Warhammer 40,000 universe. A ship carrying high-ranking marines have been hijacked by aliens, and it's up to you as commander of 4 veteran marines to save the day. The game can be played from either 2D overhead (useful for planning movement) or 3D perspective for up-close-and-personal view of the aliens.

The game has many random elements from the board game that can get you killed by sheer (bad) luck no matter how careful your planning may be, but luck can be on your side if your defence die roll is high enough. There are also many random events that occur at the end of your turn that add to the fun, such as "Master Control" which gives you control over all the doors on the level, which you can use to trap or crush the aliens. The game gives you score at the end of each level, which makes an excellent incentive to replay to try to increase your score, either by accomplishing the mission in less number of moves, or fulfill secondary objectives.

Space Crusade was released 1993 by Gremlin Interactive and is based on the same title tabletop game from Games Workshop.

Space Crusade is a turn based 1 to 3 player strategic game where players take control of a Space marine Squad. The AI is acting for the aliens. After choosing a mission, the marines must be equipped and orders have to be chosen. The higher the rank of the commander, the higher the amount of orders he can give in battle. The commander is the most important figure of your squad. He can gain higher ranks by completing missions which will, in turn, allow more orders to be given out, and will also allow him to carry more equipment. All three commanders can be saved after completing a mission.

The gaming area is shown from a 2D top view, whereas the combat is shown in a pseudo-3D isometric view.

This game is not easy to beat. There is much depth to it, and you'll have to learn every trick. Sometimes only luck will help you trough tough situations. In order to understand how aliens are hit, you have to understand how the dice work. 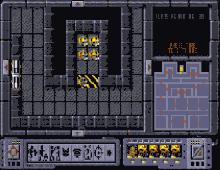 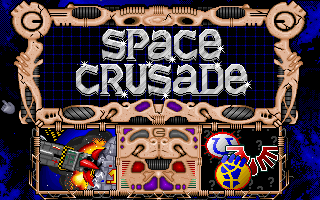