SpaceHulk-SP is a great fanmade PC version of Games Workshop's Space Hulk boardgame, designed for single player (hence the "SP" in the name). Set in a far future, the game tells the story of intrepid space marines as they hunt and exterminate the menacing "genestealers" aliens. Although this may sound similar to the official PC version published by Electronic Arts, SpaceHulk-SP is a more authentic game (since the EA version adds the element of action via "freeze time" feature and first-person perspective, which provides great excitement but was not exactly part of the official rules). Based on the 2nd edition rules published in 1996, the game lets you play all 18 missions from the three official campaigns that came with the original board game.

With solid graphics, intuitive mouse-based interface, and fun turn-based gameplay that is faithful to the original board game, SpaceHulk-SP is a must-have for every fan of the original, the EA version, or turn-based squad-level games in general. Even though it lacks the action elements of EA's game, the original rules are solid enough to give you an adrenaline rush when exploring deserted space hulks, running into genestealers' ambushes more often than your marines ever want. 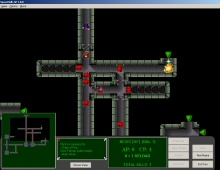