Rails is a faithful PC adaptation of the Eurorails board game from Mayfair Games, designed by Darwin Bromley. Description from Boardgamegeek.com: "Eurorails is another entry in the Mayfair crayon rail games, like Empire Builder and India Rails. Its puzzle-piece board forms a map of Europe broken down into dots. Players use different-colored crayons to draw rail from dot to dot, building their rail system. A large deck of cards is used to determine how much money will be generated by picking up a particular commodity and delivering it to the listed city, with the payoffs being related to how far away the source is from the destination. As players generate more money, they build successively larger and more comprehensive rail systems, hopefully connecting to almost all the major cities. The goal of the game is to generate a set amount of money once you've linked all the major cities."

This PC version lets you compete with up to 5 other players, any of whom can be computer- or human-controlled. Like Eurorails, your job is to build a railroad system and earn money by delivering cargo between cities. The goal is to be the first to connect to the major cities (at least all but one) and collect 250. You can play a random map, or Europe, Washington state in the U.S., or Northeastern U.S. Although the current version is billed as "experimental," the AI already plays a decent game, and all the basic rules are implemented. It may not look as polished or offer as many options as Rail Empires: Iron Dragon, the shareware game from Eden Studios that is officially licensed by Mayfair Games, but Rails already offers a lot of play value and virtually infinite replayability thanks to the random map option. An excellent one-man effort, and a "beer & pretzel" railroad strategy game that is well worth the time of every strategy fan. Recommended! 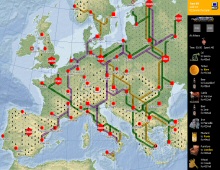