San Juan is a competently coded PC conversion of the card game of the same name, which is in turn based on Puerto Rico board game. The description at Boardgamegeek.com explains the basics: "The pack of 110 cards consists of production buildings (indigo, sugar, tobacco, coffee, and silver) and "violet" buildings that grant special powers or extra victory points. Cards from the hand can be either built or used as money to build something else. Cards from the deck are used to represent goods produced by the production buildings, in which case they are left face-down. A seven-card hand limit is enforced once per round. In each round or governorship, each player in turn selects from one of the available roles, triggering an event that usually affects all players, such as producing goods or building. The person who picks the role gets a privilege, such as producing more goods or building more cheaply. Though similar in concept to Puerto Rico, the game has many different mechanics. In particular, there are no colonists and no shipping of goods; goods production and trading are normally limited to one card per phase; and trades cannot be blocked. Victory points are gained exclusively by building, and the game ends as soon as one player has put up 12 buildings."

This PC version lets you play against up to three computer opponents in a four-player game. The AI is decent, although all the computer opponents seem to share one basic set of strategy/AI engine. The interface is a bit confusing at first, but after a while you will get used to it. As a 'work in progress' program, there are still some bugs: for example, clicking on the top-right-corner "X" to close the program doesn't really shut it down (the EXE is left running in the Task Manager) - you need to click the "EXIT" button to cleanly exit. Although more options would have been welcome, the solid implementation of basic rules, all cards, and faithful gameplay (all cards are scanned from the actual cards) make San Juan a good way to practice your strategy while waiting for the next real game of the real thing. It is also a good intermediate-level game for anyone who is interested in role-based business games. Recommended! 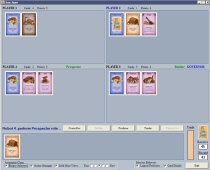