Maven is an excellent PC Scrabble program by Brian Sheppard. Maven is not only one of the first Scrabble game that provides a good enough challenge for expert players, but is one of the first computer games that achieved championship caliber in any parlor/board game. In fact, the game is so good that Hasbro's 1999 Scrabble PC game is based on a more powerful version of the AI that powered Maven - and the game was designed by none other than Sheppard himself.

The outstanding AI in Maven was coded using a 'simulation-based' approach. Before the endgame stage, computer player in Maven chooses his moves using simulation to try to determine which move would lead to a maximum number of points.

To select a move, Maven generates a set of candidate moves, simulates these moves for a specific number of trials, and finally chooses the move whose expected value is highest. In another programming feat, Maven does not randomly assign seven of the remaining unknown tiles to the opponent. Instead, it tries to match the distribution actually seen in games - by biasing its choice to give the human player a "nice'' hand. It even infers your potential future moves based on your previous moves. The result is an incredibly strong Scrabble opponent that even expert players will find difficult to beat (Maven in fact has beaten a number of Grandmasters, the world's top-ranked players). With a very strong AI and plenty of options you can use to customize your game (adding word lists, board layouts, etc.), Maven is a top-notch program that will keep Scrabble fans entertained for hours on end. 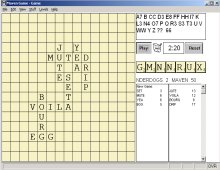