Incunabula is an uninspiring game of population growth and development. move your stacks of counters across the board, giving them room to grow and move them to engage hostile forces. The game is interesting in that it allows 1 or 2 players in addition to computer opponents, and includes the option for alliances with computer players. Unfortunately, it's clunky interface and poor AI make the game more tedious then fun. Just keep expanding, and mathematical certainty guarantees you a win. A live opponent would increase the challenge and I have to assume the game was designed with that in mind. 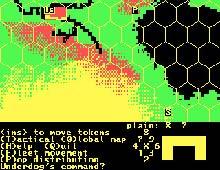