Don't ask for mercy - this one is a hardcore space strategy game you will either love or hate. You got very few graphics and most of the game is played on that rather dull desktop interface. If you decide to give this game a try you will find lots of stats, many possibilities to chose from - millions of options. Imperium is complex. The goal is simple - you of course want to be the leading civilization of the galaxy - like other, computer played, civs as well. To reach this goal you got to take care of many things - economics, military, technology, diplomacy - you can let the computer take care of most of those things and that might be the option to choose when you are playing this for the first time. But as always - if you want it to be done right you got to do it yourself ;)

I tell you once you digged into this boring looking game and found your way through all the stats and numbers you can get hooked for a looooong time. Plenty of options that became popular with games like Master of Orion, design your own spaceships and different personalities of your governors, fleet admirals and so on. There is hardly anything more you could ask for - except maybe some more graphics...

A very complex futuristic strategy game about galactic domination and a very special anagathic drug. You have been elected as the leader of Earth's galactic empire and are now in control of the empire's economy, diplomacy and all military actions. The game uses an easy-to-use window system, albeit a bit spartanic looking. As I said, it's very complex, but once you got into it, it's quite an enjoyable game with some nice aspects such as the life-extending drug called Nostrum. Recommended for die-hard strategy fans out there, and expecially fans of Rainbird's UMS games. The game will likely prove too dry and complex for casual gamers. Don't forget to also download the manual! 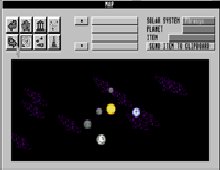