Like later RTS games, your objective in the sci-fi world of Herzog Zwei is to destroy the enemy's main base. In addition to the usual assortment of ground units such as infantry and tanks, you directly control a powerful fighter jet which can transform into a Transformer-type ground fighter or an air freighter (used to transport your ground units). You fight using your own vehicle and by deploying infantrymen, tanks, boats, and issue various commands such as "fight from a fixed position", "patrol this area," "fight in fixed radius," "go to/attack/occupy intermediate base," and others). Aside from your main base and your enemy's main base, there are about six neutral bases that can be occupied by you or the enemy. Because your units need power to do anything, and this power is depleted over time, you will effectively have to occupy at least several neutral bases to repower the units. Another reason neutral bases are important is that they generate income - and you need that to create more units. There are 8 different stages the game, each of which requires a different strategy due to terrain differences and other surprises. Your units can fall into canyons in one stage, be destroyed by lava in another, and require a lot of attack boats in the archipelago stage. This variety is what makes Herzog Zwei a lot of fun, and also very challenging because the computer always starts with many more units than you do (which is a common tactic in many strategy/war games: offsetting weak AI by giving computer player a big number advantage). You can either play against the computer, or another player in split-screen mode.

Perhaps the most important reason the game never sold nearly as well as Sonic the Hedgehog or other Genesis bestsellers is that it was a great game released on the wrong system: hardly anyone associates consoles like Genesis for an in-depth strategy game, let alone a genre pioneer like Herzog Zwei. Thanks to advent of emulators for PC, you can now experience this highly underrated classic in its full glory. 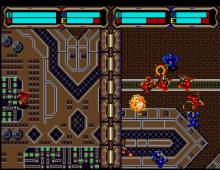 People who downloaded this game have also downloaded:
Dune 2: The Battle for Arrakis, Incubation, Master of Orion, Lost Admiral, The, Lords of The Realm 2