Game of the Amazons, The

The Game of the Amazons is an excellent PC version of "El Juego de las Amazonas," an original, chess-based board game invented in 1988 by Walter Zamkauskas of Argentina. In this two-player game, each player controls four amazons which move like chess queens. From the official blurb: "After [the queen] moves, an amazon must fire an arrow in the same manner from its landing square (one or more vacant squares orthogonally or diagonally). The square where the arrow lands is then marked with a poker chip or other counter to indicate it is blocked (in the computer version blocked squares are colored red). No amazon or arrow may move into or through a blocked square. White moves first, moving one amazon and firing an arrow with that amazon. The players alternate moving, and the player last able to make a move wins."

The game is both fun and challenging. The computer AI plays a tough game on Medium and Hard levels, and the rules are different enough from chess to keep even expert players entertained. Overall, The Game of the Amazons is one of the best chess variants ever created. Highly recommended! 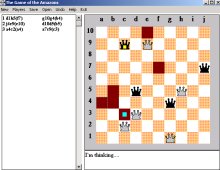 Game of the Amazons, The screenshot