Front Lines is a hypothetical wargame that strongly resembles QQP's venerable The Perfect General series, combining the elements of board game warfare with good graphics and sound. Set in the next century, the game simulates tactical-level ground combat, with focus on armor and infantry.

One of Front Lines's high points is the variety of play options. The game includes dozens of pre-constructed and challenging scenarios for one or two players, as well as a full scenario builder and editor you can use to design your own battlefield. In terms of gameplay, Front Lines fits somewhere between The Perfect General and Blue Byte's Battle Isle series: it is not as realistic as The Perfect General, but it gives more nods to realism than Battle Isle. The catalog-style descriptions of vehicles are excellent, and even instructive for the casual wargamer. The movement and combat interface system is easy to use with realistic battle segments. The game isn't a fast-paced rush to victory, but rather an exercise in small unit tactics with a great level of detail. The computer keeps track of hidden units, elevation, line of sight, target strength, distance and more. Overall, an excellent design that is ideal for novice and intermediate wargamers. Flawed AI and some questionable realism, though, means expert wargamers should stick to Norm Koger's Red Lightning for their realistic hypothetical wargame fix. Not as good as The Perfect General, but a worthy attempt. Recommended! 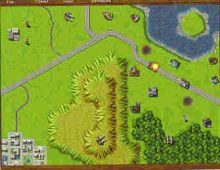