Fireteam 2200 is a detailed and complex wargame about tactical ground combat in the 23rd century. The usual trappings of a galactic conquest game are here: many star systems to explore and conquer, R&D capabilities, and a serviceable economic model. However, the keyboard-only interface is very cumbersome, and the replay value is minimal due to the lack of a scenario builder. Overall, a commendable attempt to dethrone SSG's Reach for The Stars, but one that falls flat on its face due to poor interface and a too ambitious level of complexity that wasn't matched by competent AI. Anyone looking for a complex 4X galactic conquest game should try Star Legions or SSG's classic instead. 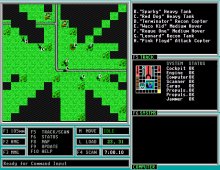