Final Frontier is a decent futuristic wargame that puts you in control of various robot military units. The game is one of Mirrorsoft's least known games, and for good reason: aside from the notable fact that this was one of the first real-time squad-level wargames ever made, there's not much to recommend in Final Frontier. The gameplay is simplistic, and ultimately quite boring due to the limited premise (conquer the opposing robot cities) and lack of unit variety. Some options, such as the ability to recruit enemy robots to join your cause, are interesting, but none of them really makes Final Frontier stand out from the crowded genre. The computer AI puts up a good fight, but the game never really rises from the tedium that sets in midway through as you produce enough units to use the all-too-familiar "tank rush" tactic typical in later real-time games. Overall, worth a look mostly as an example of a not-so-common below-average game from PSS. 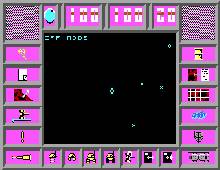