One of the most original and influential games ever made, Epyx' Crush, Crumble & Chomp!. The description in the manual is enough to tell you why this game is special: "[the game] gives you a chance to recreate just about any monster movie ever made. Only this time you write the script and direct the action; and you get to be the star - the real starmonster. Any monster. Every monster. Be the giant amphibian [Godzilla], leaving a corrosive trail of radioactive waste in your wake, as you slither out of the river and into an unsuspect metropolis. Smash cities underfoot, and atomize helicopters in mid-air. Emerge from the murky depths as the Kraken, and tear apart huge suspension bridges with your terrible tentacles. Feed on the freeway and dine on the docks. Scuttle about a city as Arachnis, striking suddenly at humans paralyzed with fear. Block roads with your webs, and escape underground through your network of tunnels where not even tanks dare tread. Ooze out of the sewers as the amorphous, irresistible Glob, absorb anything in your path. Pulverize skyscrapers as you paralyze their inhabitants and leave a swath of slime that ignites into a wall of fire. Stalk the landscape in the silicon brain of the robotic Mechs and Atomize artillery! Neutralize the National Guard! Eradicate everything with an exotic array of alien weaponry!... With so many variations to choose from - four cities, five objectives, six monsters and the chance to play Dr. Frankenstein and create your own creature - you can Crunch and Chomp for years until civilization Crumbles even without the assistance of your favorite monster."

With a great concept, flawless execution, and a near-perfect blend of action and strategy, Crush, Crumble & Chomp! remains today one of the best games ever made. With movie monster games being very few and far between (this, and EA's Mail Order Monsters are probably the only two successful ones), the game is one of THE best candidates for a modern remake.

Note: An interesting tidbit about this early classic is that the first versions of the game, for Apple II and Atari, were copyrighted "Automated Simulations," which was the first name of the company that would shortly later become Epyx. 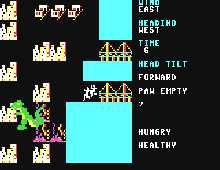