A very interesting game. As the title may tell your job is to build your own moonbase. The game is a lot like the more famous Sim City but instead of a city you have to build and expand a moonbase. This sounds interesting and it is but the game still lacks in the things you can choose between when you build and once you have quite a moonbase the game still doesn't really offer anything.

This is where Sim City could continue to provide game play. But if you are into this genre this game is really worth a try and you won't regret it at all.

Moonbase is kind of a Sim City style game. Though I'm not that a big fan of Sim City itself, this one seems to be quite fun. Building up a base on the moon is far more interesting than managing a city (O.K: - I'm more a SF-Fan, than stuck in reality...). I have to admit that I didn't yet get into the whole thing, but I think I got the general idea and so will you. You got different modules to combine - standards like a power plant and habitation modules for example. In general the game does not seem to be all that hard, but your money comes from NASA so you can be sure they also expect some results.

The graphics aren't even good considering the game's from 1991 - but well, it's a nice interesting Sci-Fi sim and while failing to be THE smash hit it sure is worth being checked out if you're into the genre.

Moonbase might as well be called "SimMoonbase": it is a simulation of mankind's first base on the moon. You can build living modules, oxygen production plant, science labs, and a few more buildings. The building types are very limited, and the goal seems to be just maximizing your income from shipping production (helium, etc.) to earth. A small, interesting simulation that unfortunately offers much fewer options and replay value than SimCity.

This game wasn't very popular, but I loved it. It made a great change from SimCity. Its very similar to most sim games, but being on the moon has a whole new angle. You have to cope with starting a colony on the moon, making sure you can accommodate the right number of workers and tourists, as well as produce all the elements to sell on the markets. It's a real management kind of sim game.

Like most sim games you start off with a certain amount of money, and every year you are given more money from NASA. But as you progress, you grow, and produce products to sell on the market such as LLOX, electronics, materials etc. That's how you make money, therefore its good to keep an eye on the stock market and know when to buy and when to sell (hence the management type sim game).

When you are erecting the buildings all over the Moon, you have to make sure that everything is connected to both power and heating (must get quite cold there). You can have roads etc, and the moon colony soon turns into a big massive galactic city.

Here are some quotes I found from the back cover of the game (thanks to some fanatic's Moonbase site):

"Select and clear a site for the Lunar colony ... build landing pads ... erect habitat modules ... set up power stations and grids ... create mining and processing facilities ... supply essential life-support services to the colonists. Comprehensive socio- and economic models from KDT Industries - a NASA contractor - animate and enliven you base."

"Explore the lunar surface for new mining sites. Process the raw materials you find into oxygen, water and helium-3, then use then internally or sell them to Mars missions. Build hotels for fat cats from Earth."

Moonbase is a really fun game, it's a great challenge and you would enjoy it. It's a good game for getting the feel of those really involved sim games. Warning: Save your cash, you WILL run out of cash. 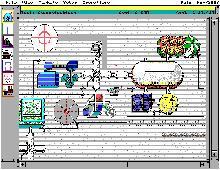