A very lackluster RTS in every sense of the word, Final Conflict won't raise any eyebrows or lure any Command & Conquer fans away from their screen. Despite being made in 1997, the game looks and plays much worse than Westwood's 1992 classic Dune 2. You can play as the humans or the Donanji Marauders, but both sides are not all that different from the other. They have similar units, similar technologies, and the terrain they fight in lies in the drab sand planet that doesn't have any sandworms to (pardon the pun) spice up gameplay.

The game is basically the same gather resources - build units - conquer the map formulae, done better by numerous games. Despite the box boasting of "21 uniquely designed missions," they do not look all that unique to me. The only good things I can think of are some surprises that show up mid-missions, such as barriers, hyperlink transports, and computer virii. You can also accumulate enough resources for use in subsequent missions, although most of the missions are so easy that simple "tank-rush" strategy should do the trick. All in all, a thoroughly bland game from an equally bland company. Avoid this so-so game unless you are absolutely bored of every other RTS. 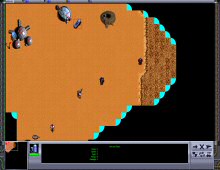 People who downloaded this game have also downloaded:
Grandest Fleet 2, The, Delta Hydra, Deuteros: The Next Millennium, Gloriana (a.k.a. Elisabeth I), Front Lines