Delta Hydra is a decent 4X strategy/action game where you compete against rival space agencies in a race to gain control of the Delta Hydra solar system. The plot: three Terran space agencies (ULSA, SEAM, and AASA) have launched three separate heavy transports filled with colonists to the Delta Hydra solar system. You are in command of ULSA and will manage colonies, science and research, exploration, diplomatic relations and warfare.

The game plays similar to Master of Orion and similar games, although on a much more simplified scale and more plot-driven (similar to Alien Legacy for example). You can establish peaceful relations with other agencies or declare a full scale war, research new weapons and equip your space vessels with them, and of course meet strange alien races. While balancing economics, diplomacy, and combat is no less challenging than other 4X games, Delta Hydra is easier than most due to limitations in map size, technologies, and unit types. The computer is also quite easy to beat, although not a walkover. Fortunately, the game has random map feature that offers virtually unlimited replayability. Overall, if you like 4X games but feel they are too complex or difficult, Delta Hydra might be your cup of tea. It's fun and challenging enough for newcomers to the genre, although strategy gamers who cut their teeth on the likes of Master of Orion will find little challenge here. 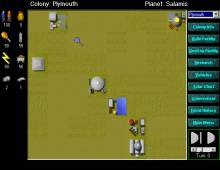 People who downloaded this game have also downloaded:
Deuteros: The Next Millennium, Fragile Allegiance (a.k.a. K240), Master of Orion, Incubation, Iron Seed