The basic storyline is simplistic, you are the newest employee of TetraCorp, charged with the job of mining minerals from asteroid belts in the fragmented sectors. Sounds easy enough, that is untill you add the alien element to it, 7 other species are out with exactly the same goal as you, some will be friendly and some wil be unfriendly, and then you have the Mauna the scourge of the sector. The diplomatic aspect of the game is in my opinion an equal to Master Of Orion II with a multitude of options. One of my favourite of these is trading pointless trae goods with the Merchants that appear from time to time and selling them to certain species for great profit.

Fragile Allegience also focuses more intensly on the biological warfare side of things, your agents can be sent to an opponents asteroid with various toxins, each one of which requires a certain antidote (if available). which of course you can always sell to them afterwards ;) Combat is handled well, with your ships being fully customizable so you can build a fleet dependant on your own ideas, Combat can also be very strategical, as an example if you were to gather a large fleet and move it towards the border between you and an alien culture, the AI will pick up on this and adjust the reactions accordingly. As well as ships each asteroid has the ability to build missles which can be aimed at your opponenent, and stratgic placement of missle bay asteroids can be very helpfull.

This game is almost everything you can ask for in a space strategy with the only failing point being the inability to perform interesting research, but this is catered for by the ability to purchase new blueprints from TetraCorp headquarters. A must have! 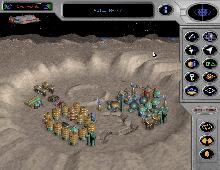 People who downloaded this game have also downloaded:
Evolution: The Game of Intelligent Life, Syndicate Wars, Imperialism 2: The Age of Exploration, Dungeon Keeper Gold, Lords of The Realm 2