One of the most ambitious shareware wargames ever made, Fields of Battle is a strategic simulation of World War I on the strategic level. While the grognards will likely be disappointed at the absence of tactical options and relatively simplistic battle interface that is more reminiscent of parlor boardgames than tabletop wargames, Fields of Battle deserves recognition for introducing many interesting concepts to the genre, especially the first use of a neural network in a commercial computer game.

The game looks and feels like a cross between board wargames Risk and Third Reich, although the level of complexity is closer to the former than the latter. It is reminiscent of SSI's classic Clash of Steel in scope: as commander of one of the countries engaged in World War I, players vie for control of Europe, Russia, and the Middle East over a map divided into various regions, with production, unit allocation, and sabotage all being keys to success. Each game turn represents one month in game time. During your turn, you can read status reports, move combat units (on a grand strategic map of Europe), buy or produce units, and set support units. That's about all the choices you have-- no more, no less. Fans of complex wargames such as any one of Gary Grigsby's classics will be sorely disappointed. You can build other structures, such as railways and fortresses, as well as upgrade the factories, but by and large these options are incidental to gameplay.

What makes the game very interesting, though, is what goes on beneath the facade of simplicity. The game uses full-fledged neural networks for the computer player AI. This means, for example, that the computer supposedly learns from its mistakes, and adapts to the human players' strategies. This makes FoB the first commercial game that I am aware of that uses neural networks of any kind (definitely beating out Battlecruiser 3000 for that honor, despite claims to the contrary). Although none of the game's 9 scenarios (in the registered version here) is very long, replayability is enhanced by the fact that up to 6 human players can play against each other, although only in hot-seat mode.

Overall, FoB definitely deserves a second, more thorough look from any wargamer who dismissed it the first time around. I'm not good enough of a wargamer to verify whether or not the game's neural network truly works as it should, but I'm sure the game will provoke (or re-evoke, as it were) some interesting discussions about wargaming AI, and AI in general. The old saying "looks are only skin deep" is perhaps a cliche, but it is a perfect description of Fields of Battle-- a game whose simplistic interface betrays a much deeper underlying engine that is highly underrated. 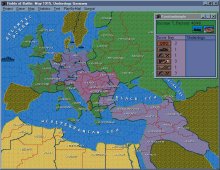