This gem was supposed to be the first in a series by a small English company. The reviews at the time were glowing, but unfortunately the game didn't sell well. It comes with ready made scenarios from Ancient Egyptian times to the time of Rome. You can devise your own battles on custom-made battlefields easily with an astounding selection of historical units to choose from. Recreate ancient battles by finding out unit disposition and terrian or just play for fun..this game simulates the nature of Ancient Warfare at a fast and fun..yet accurate pace. Printouts are available after each battle as well. 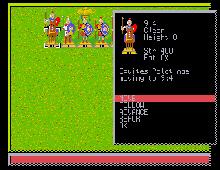