Conflict in Vietnam, Crusade in Europe, and Decision in The Desert are three outstanding wargames, collectively released as "Command Series," remain to this day some of the most well-balanced and fun wargames ever made. Designed by the powerhouse duo of Sid Meier and Ed Bever, all three games feature innovative real-time play, interesting realistic and hypothetical scenarios, and above all-- excellent computer AI that uses historically accurate strategies, and fun head-to-head mode. Covering the most famous wars in history from World War 2 to Vietnam, these classics belong in every wargamer's collection.

From MobyGames: The first of the "Command Series" of tactical wargames released by MicroProse in the mid-1980s, Crusade in Europe is the descendant of Meier's first wargame, NATO Commander. Meier and Ed Bever, Ph.D., collaborated on Crusade's design, which (along with the game's manual) shows an enormous amount of research and attention to historical detail. As the title suggests, the game's focus is the European Theater of World War II in 1944-45, and the Normandy Invasion in particular. Although there are only five scenarios, each can be customized through multiple variants (with different initial deployments and reinforcement schedules) and levels of difficulty. Another nice feature is the ability to play using either tradtional boardgame symbols or unit icons. Both sides (Allied and Axis) can be played, and two players can play head-to-head in hotseat mode. 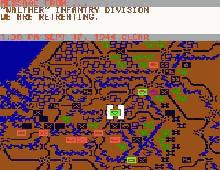 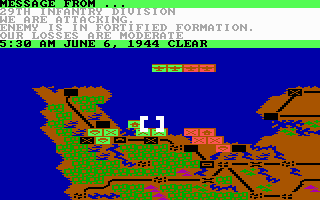 People who downloaded this game have also downloaded:
Decision in the Desert, Conflict in Vietnam, Clash of Steel, Fire Brigade: The Battle for Kiev 1943, Panzer General for Windows 95