One of the most overlooked wargames of all time, Fire Brigade is an exceptional game by Panther Games that simulates the 1943 battles around Kiev on the Eastern Front. Released only in Australia, Fire Brigade quickly gained a small following among die-hard wargamers for its tough AI, clean user interface, and realistic game engine. As M. E. Brooks points out in his synopsis: "...good documentation and excellent packaging have yielded a game that has withstood the test of time, although the learning curve was somewhat long. One of the few games from the early years of computer wargaming that remains playable, although the game often seems to play itself." If you are a fan of "hardcore" wargames that boast a challenging AI and high replayability, Fire Brigade is a must have - a game that deserves at least as much recognition as classics from fellow Australian company, SSG. And big thanks to our resident cracker Mok for patching this oldie to run on new graphics cards :) 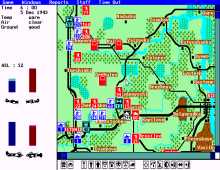