"Based on the Victory Games boardgame of the same title, this product covered the American Civil War (1861-1865). It showed how one can take a highly playable boardgame and turn it into an unplayable computer "product". Marred by incomplete rules, incomplete graphics and incomplete programming, Civil War stands out clearly in any "Crowd of Losers". Caveat emptor. Besides disappearing corps, the program had an annoying tendency to overwrite hard drives. My personal choice for "WORST COMPUTER GAME OF ALL TIME". " 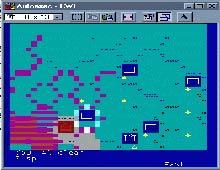