Blitzkrieg: Battle at The Ardennes

A conversion of the board game of the same name, this simulation of Battle of the Bulge had a confusing interface and lengthy game mechanics. Although it's a faithful conversion, the awkward user interface and questionable AI makes it one of the worst wargames from RAW. Definitely a case of fun sacrified for the sake of realism alone, Blitzkrieg will appeal only to die-hard wargamers who are interested in the subject matter and crave historical accuracy. Even the manual is poorly written. Overall, a disappointing wargame that could have been much more, had the designers focus less on faithfully recreating the complex boardgame and more on playability. 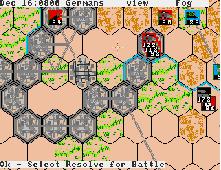 Blitzkrieg: Battle at The Ardennes screenshot