Battle for Moscow is a great unofficial PC version of a tabletop wargame of the same name, which was created by Frank Chadwick for Games Designer Workshop, and published on the Internet as a free game in 1996. Designed to introduce newcomers to the wargame genre, Battle of Moscow recreates both Germany's unsuccessful attempt at capturing Moscow in late 1941, as well as the following Russian counter-offensive that denied Germany its chance to conclude the war in Eastern Europe that year. To win as Germany, you must march toward the Russian capital, capturing it ensuring them a great victory. To win as Russia, you must keep Moscow out of German reach and drive Axis units back to their starting position by the end of winter.

Battle for Moscow does an excellent job of translating Chadwick's newbie-friendly rules to the PC. In the course of playing the game, you will learn numerous tabletop wargame basics including hex movements, zone of controls (ZOC's), how combat odds work, the importance and mechanics of supply and reinforcements, calculations of rail movement, the effects of weather on combat, and more. The game is played in traditional turn-based format, on a 16x10 map with an average of 50 units. There are 2 scenarios and a full campaign that lasts for up to 14 turns.

Unfortunately, Battle for Moscow has no computer opponent, so you will have to either play against a friend on the same computer, or use the Play-By-E-mail (PBEM) feature. But as a computer aide that introduces you to the genre, this freeware title offers excellent value. 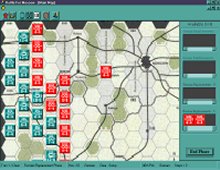