One of SSI's earliest games, Battle for Normandy is a hex-based, turn-based wargame based on more or less the same engine as Tiger in the Snow and Knights in the Desert. That is to say: ASCII characters, coded entirely in BASIC. Your goal in operation "Overlord" is to command the Allied forces in the historic D-Day in World War II: take and occupy Cherbourg, Caen, the road network of St. Lo, and penetrate as deeply as possible into the continent. You can play as the Axis side, but in that case you will have to play against another human player in hot-seat mode: the game does not have "computer as Allied" option.

True to the usual turn-based style, the game proceeds in a logical, orderly fashion, from choosing air supply drops, allocating supplies, expend "air points" for interdiction, and move units. The game gives you full tables for transport availability of each day, as well as weather forecasts. Battle for Normandy is one of the earliest PC wargames to model the effects of fatigue and leadership levels. Units that advance beyond supply lines will quickly lose strength and gain fatigue, and leadership acts as a positive combat modifier. Similar to other SSI games, you can change the difficulty level and scenario parameters, although there is only one map to play, which severely limits the replay value. You may want to replay the game to try to gain higher victory points than the last time, but that is the only replay incentive.

Although it does not stand the test of time too well and has long been superceded by true classics such as Clash of Steel, Battle for Normandy still stands tall as a pioneer in the then-budding field of computer wargames, a field dominated clearly by SSI in the early 1980s. For a 1982 BASIC game, Battle of Normandy is not bad at all despite its limitations. 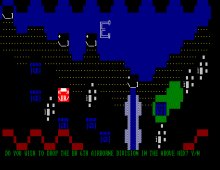 People who downloaded this game have also downloaded:
Battle for Moscow, 101 Airborne: The Airborne Invasion of Normandy, Conflict in Vietnam, Clash of Steel, Battles of Napoleon