The Napoleonic Battle of Three Emperors, Austerlitz was a logical successor to Datasoft's earlier Napoleonic wargames Waterloo and Borodino: 1812. Although the game sports some incremental improvements over earlier releases, they are not enough to disguise the fact that the graphics and play value were obsolete when released. Very disappointing, to say the least. Fans of Napoleonic warfare would do well to skip this old game and play SSI's classic Battles of Napoleon instead. A good example of a game that was released far behind its time. 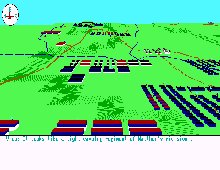 People who downloaded this game have also downloaded:
Battles of Napoleon, Battle of Antietam, Ancient Art of War, The, Waterloo, Great Battles: Collector's Edition, The