WWF Wrestlemania: The Arcade Game is an excellent conversion of the popular Bally Midway arcade game of the same name. In contrast to some earlier duds such as Judge Dredd, Acclaim got itself together this time around to deliver an excellent conversion that rivals non-PC versions (e.g. SEGA Genesis and PSX) in delivering a no-holds-barred wrestling action for the PC.

Eight of the original WWF wrestlers along with their characteristic moves are here at your disposal, including Doink the Clown, Razor Ramon, and Lex Luger. The wrestlers are all digitized and nicely detailed (about half the screen large), making it easy to perform moves, and a lot of fun to see the results.. especially when it's your opponent who is tossed around the ring.

The variety of moves you can perform is one of the game's best features. Even the common moves such as a punch are different from character to character. For example, while one wrestler's super-punch may be a smashing forearm to his opponent's head, another's will be a powerful round-house. Special moves are harder to pull off, but always spectacular to watch, with plenty of visual effects and bone-rattling sound effects. With a four-button gamepad (probably the best control method), there's enough challenge involved in learning and performing the moves to keep the game interesting, but not overly so.

The only problem with WWF Wrestlemania that hurts its long-term play value is the limited number of wrestlers. The tournament mode has you facing off against the same eight wrestlers you can choose from, sometimes even pitting your character against himself. Some new faces including "mystery" characters similar to arcade fighting games would have made the game much more fun. Also, the 2D side view makes the game look a bit too two-dimensional and characters like paper cutouts, although character graphics are detailed enough to carry the game. If you are a wrestling fan or just like fighting games in general, WWF Wrestlemania is a must-have. The game looks good, feels great, and above all - it's a blast to play. Highly recommended! 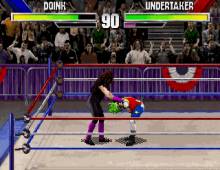