WWF in Your House

One of the best wrestling games ever made, WWF in Your House is an excellent game developed by Sculptured Software that, for once, offers much greater depth and variety than lackluster ports of Acclaim's arcade games that preceded it. The game gives you the opportunity to play as one of ten WWF wrestlers; Bret Hart, Owen Hart, Shawn Michaels, The British Bulldog, The Undertaker, Ahmed Johnson, Goldust, Vader, Hunter Hearst Helmsley , and The Ultimate Warrior. Chris McMullen says it all about what makes this outstanding old game so much fun in his review for Games Domain:

"WWF In Your House offers three different single player modes, and three different multiplayer modes. The former, once you have selected the costumed psycho you wish to play, pits you against a varying number of wrestlers, depending upon which option you have chosen; the hardest option has you facing wrestlers two and three at a time, culminating in a ten against one fight. Not for the ham-fisted; if your gaming diet consists totally of hex-based military strategy game, this is definitely not for you. But for those of you still reading, be prepared for a tough fight.

In WWF wrestling, each wrestler has his own trademark moves, such as the Undertaker's Tombstone slam, and all of these have been faithfully duplicated in WWF In Your House. These are executed by the usual sequence of keypresses some, but not all of which are listed in the manual. There's none of the hyper-complicated 'spin the joypad five times, then press the seventh kick button with your foot' moves that most beat-em-ups are famous for; you can comfortably pull off most of these with the keyboard. Sculptured Software, the game's designers, have also added a number of other moves that you are less likely to see on television, such as fireballs, and stun attacks. Some characters can whip out various items such as chairs, cards, and headstones, and smack their opponents around the head with them.

...Sculptured Software have cleverly avoided turning WWF In Your House into a mindless button-pumping or joypad waggling fireball-fest. Timing of moves is important; if you miss a move, you can find yourself vulnerable, and your opponent will be able to get his (potentially quite nasty) attack in. Throws and headlocks play a major part in the game; there are buckets of bone-crunching throws; each of which take different levels of expertise to pull off. However, if your opponent tries to get you in a headlock, and pull off a throw, if you're fast enough, you can pull a reversal move which will turn the tables on him, and introduce his face to the canvas. There's also various double damage bonuses for high-risk moves, and even fatality style finishing moves, although there's no blood or flying limbs; presumably the WWF is too 'nicey nicey' for that. And of course, there's the obligatory combos. This game doesn't do things by halves.

WWF In Your House is a distinctly above average beat-em-up, and adds a hint of originality to the usual beat-em-ups that are available on the PC, and other systems. There's also a multi-player mode, allowing for up to 4 players, and various team / vs options. Sculptured have manage to take what could have been a duff licence, and create an excellent beat-em-up that is worthy of any beat-em-up fans attention. It's playable, fun, and you can't ask for a lot more than that. Now, if you'll excuse me, I'm off to put on a wierd wrestling costume, and taunt O.A.Ps." 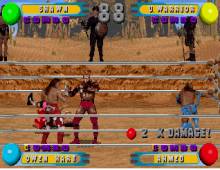 WWF in Your House screenshot