One of many games based on the world's most popular 'sports entertainment' industry. Yes, WWF Wrestlemania lets you play any of your favourite wrestlers from 1991 - Like The Hulkster, Mr. Perfect, The British Bulldog and Ultimate Warrior.

The graphics in the game are nice with good graphics all throughout the game. The title screen looks nice and the in-game music is pretty good as well originally (on the Commodore 64) but in the PC version I could really be without it completely. As well, there are sound effects, such as the sound of your opponent (or in my case, me...) crashing to the mat after a painful wrestling technique.

The game is pretty easy in the beginning but it gets really hard. I crushed my first opponents without a problem, but as I got further down the road, the computer beat me up pretty bad. But, what can you do? Originality isn't a problem. There aren't many wrestling games out there, especially good ones like this. So this game picks up a lot on those points. Overall, this game is pretty good. If you are a wrestling buff, or just looking for a solid game to play, you might want to check this one out.

The first WWF-licensed computer game is a horrendous game, although still (surprisingly enough) better than its even worse successor WWF European Rampage. OCEAN's WWF Wrestlemania features a lot of blocky wrestlers who look nothing like their real-life counterparts, uninspired stadiums, poor controls, and basically everything else that make people consider it the stupidest sport ever devised (come to think of it, those might be the very same reasons that attract fans to the game.... oh well). At least there's a decent atmosphere-building insult-trading section before the start of every match that is halfway amusing to watch, although it adds nothing to the game. Overall, an abysmal game, and a total waste of the blockbuster license. Wrestling fans would be well advised to skip this one and play any other wrestling game instead-- except its sequel, of course.

I guess you can tell by now, that I simply love wrestling and basically all kick the other guy in the stink-making-part-of-the-body kind of games. This game is no exception.

It's yet another wrestling game, but this time it's a really old gem. The game was made by Ocean in the year 1991. The graphics are good for the time of its creation and the game runs smoothly enough (even if you'll see an occasional glitch at the bottom of the screen). The sound is not really worth mentioning. Game play itself is simple enough and you can either compete for a title and play against the computer or practice against a friend (unfortuantely your friend will always have to play Mr. Perfect, while you can choose between three wrestlers).

I remember when I first played the game on C64 I absolutely loved it. I always chose either The British Bulldog or the Ultimate Warrior (I somehow dislike Hulk Hogan and there are only these three to chose from). Most of all I liked the taunts that wrestlers give to each other before the start of the match (they don't have an effect on the match, but are kind of fun). You don't have many moves, just your basic kicks and punches. To start running double press in the same direction and you can do a dropkick while running (or the opponent can counter by throwing you in the air). There's basically just one wrestler specific move and that's the move they execute after winning a power struggle (just stand close enough together and they'll lock their wrists and start testing their strength). Whoever wins will do something to the opponent. These power struggles are really a murder for the keyboard (you must press left and right as fast as possible).

All in all a nice little game I loved playing and it brought back many memories. 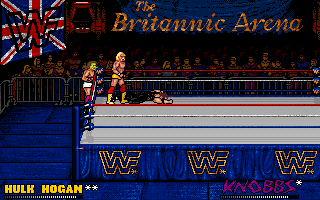