A great conversion of the arcade game of the same name, based on one of the world's most popular cartoon series of all time, Konami's The Simpsons features great graphics (for its time, of course), fluid animation, and best of all-- faithful characters' personalities and gameworld that truly brings the Simpsons' Springfield to life. In this episode, the Simpson's troubles begins when Mr. Smithers has kidnapped Maggie right in front of her family. Your mission is to rescue the youngest Simpson from the clutches of the evil sycophant.

You can choose to play as any of the remaining Simpsons, each with his or her own characteristics that fans will instantly recognize. Bart is the most fun of the bunch: he scoots around on his skateboard, which he can use to whack people with the skateboard, or jump over them. When he dies, a devilishly red Bart (complete with pitchfork) hovers over the corpse, and (if you have any remaining lives) the new Bart zooms in in his Bartman costume. The second-most fun character to play is Marge, who wields a mighty Hoover vacuum cleaner as her weapon. Lisa swings her jumprope around like a whip, and is the most difficult character to play because of her low health level and limited attacks. Lastly, Homer simply punches the bad guys with his fists, but can endure a lot of damage before dying. Most bad guys are dressed in purple suits, but many of them are disguised as nonchalant citizens who quickly ambush you by surprise.

All of the game's 8 levels ("stages") and 2 bonus levels take place in locations from the show that are faithfully recreated, including the Springfield Cemetery, Moe's Tavern, Krustyland, and even The Nuclear Power Plant. Although The Simpsons offers two-player mode, Konami unfortunately removed the "team play" feature in the arcade original that offers new attack modes when two players team up (e.g. Bart can hope on to Homer's shoulders, and Marge and Homer can tumble together like human wheel). However, there are still many creative weapons that scatter around the screen (my favorites being the slingshot and snowball), as well as food and other items, that gameplay is always refreshing. Overall, this is a great game based on the show, and a must-play for every Simpsons and platform game fan. Just be wary of very difficult end-level bosses. 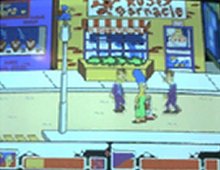 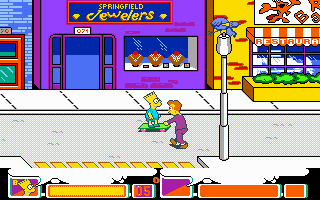