Simpsons: Bart vs. The Space Mutants, The

An fun platform game that doesn't quite live up to Konami's classic The Simpsons, Bart vs. The Space Mutants is a solid conversion of the NES port of the same name, starring once again TV's most famous cartoon boy. Bart is the only person in Springfield who knows that aliens have landed and are possessing the bodies of the townspeople. Though the space mutants look like humans, Bart is able to see them with the help of a pair of X-ray glasses. The space mutants, naturally, plan to invade the earth. To do that, the aliens need different items for their "miraculous machine". The object of the game is for you, Bart, to either spray these objects with your trusty can of red spray paint, or to collect them before the aliens can grab them. These items differ from level to level (i.e. Level one, purple objects, Level 3 Blue balloons).

While you are collecting or destroying the objects, you have to be on the lookout for aliens disguised as townspeople. This is where the fun comes in: if you see an alien, you have to bop him on the head and the alien will fly away to space leaving behind a letter. You can collect as many letters as you can to spell the names of the rest of the family. If you succeed, that member will help you defeat the "boss" enemy at the end of each level, who are very difficult to defeat on your own. You will also run into other characters from the show, including Moe, Sideshow Bob, Jebediah Springfield, Itchy and Scratchy, Nelson, Adil (Albanian spy), Krusty the Clown, and many others.

Overall, Bart vs. The Space Mutants is a fun game that isn't as varied or creative as Konami's earlier games based on the show, but it is still very entertaining. Recommended! 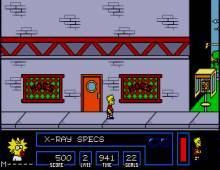 Simpsons: Bart vs. The Space Mutants, The screenshot