Virtual Springfield is a disappointing 'game' from FOX Interactive. Set in the Simpsons universe, this CD-ROM takes you on a virtual-reality tour of Springfield - more specifically, about 50 famous locations ranging from Moe's Tavern to Krustylu Studios. Naturally, you can also visit the Simpsons' home, where you browse the family album, snicker at Homer's mail, explore Bart's room, and more. Most of these locations feature Simpsons characters, voiced by the original cast members.

Although it is billed as a "game," Virtual Springfield is really more like an interactive 3D atmosphere. There are a few small (and I DO mean small - as in, finishable in 10 minute or less) mini-games scattered around the town, but all of them are boring. One of the bigger games is a treasure-hunt of sorts: if you can find all the hidden baseball cards in the game, you will be treated to extra animations and URL of a website (that no longer exists). This is merely a ploy to trick you into clicking as many objects as possible to reveal animated sequences, and you even have to exploit some bugs to find all the cards.

Even as a non-game interactive title, Virtual Springfield is not very appealing. Most locations are drawn with wonderful details that Simpsons fans will love, but very few objects in each screen can be interacted with. In all, anyone can finish this title in about 1-2 hours, and that includes finishing all the games and watching every animation clip (these clips alone total about 25 minutes). Although the humor is just as much fun as the TV show, the whole thing is all over too soon, and none of the games warrants a replay. Faithful but very low "bang for the buck" value, this disappointing title is fun only for younger kids and die-hard (and I mean very die-hard) Simpsons fans. Too bad FOX did not take lessons from Starwave's superb Muppets Inside (reviewed on this site) on how to do justice to a blockbuster license. Konami's Simpsons games (which you can find on this site) are far better than this marginal game that offers far less gameplay on a CD-ROM than many 5.25" classics under 100KB. 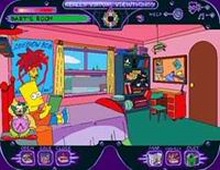