Simpsons: Bart's House of Weirdness, The

A fun action game with minimal adventure elements, The Simpsons: Bart's House of Weirdness is a cross between a toybox and a game, starring the world's most famous brat. The action begins with Bart being grounded yet again in his room. It isn't the worse thing in the world, of course, and when you've got an imagination like Bart does, staying entertained is easy indeed.

The game is a collection of 5 interwoven "adventures," most of which can be played in any order. Each adventure has a specific goal, which can either be an action or an item (e.g."have fun!," or picture of a book). The goal is clearly spelled out in the box at the bottom of the screen, so you always know what you are looking for. While you can earn points like in most other platform games by collecting coins, defeating aliens, earning cool items, etc., points are only for recording high scores, and are not essential to completing the game. All adventures are a lot of fun to play, not least because of unique, fun items you can find and figure out the use for. The space aliens sequence (triggered by Bart's daydreams) and the basement action game are in particular very entertaining.

After Bart finishes all adventures, he can begin his greatest mission: saving his hero, Krusty the Clown, from Sideshow Bob. You will then guide Bart high and low through Springfield, searching for 3 cool items that will help him rescue Krusty. When Bart has all the cool items (and has completed all the missions), he can enter the final level, Krusty's Jungle Land.

The game is by no means revolutionary as far as gameplay goes, but it features a lot of innovative variations on the themes that fit well with the spirit of the show. For instance, the traditional health meter is replaced by a Cool-O-Meter (gauge from Un-cool to Cool), which measures Bart's coolness-- something he really cares about. When everything is going well, Bart's cool. If he takes damage his cool rating.drops, until he is toast. Bart can raise his level of coolness by finishing a level, finding donuts, or jumping on mushrooms. The game also includes many fun "extras," such as a VCR that you can use to fast-forward or rewind your adventures, and an option to change the game music (from Bart's stereo).

The only gripe I have with this fun game is that you must go back to Bart's room to save. This can be annoying if you are miles from his house, or in his dreams. Still, this minor issue hardly detracts from a very entertaining experience. Highly recommended for fans of the show, and everyone else who aren't afraid of the joystick. 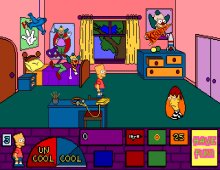