One of the best fanmade Super Mario games, bar none, Mario Forever from Polish freeware group Buziol Games is a highly polished, addictive, and long Super Mario clone, featuring dozens of levels spanning multiple worlds, all the familiar "boss" monsters and NPCs from Nintendo's classics, and even a few surprises up its sleeve. The plot, if you need it, goes as follows: Bowser, that big spiky boss monster, is back with a vengeance. He has destroyed half the peaceful mushroom kingdom, and so it's up to our Italian plumber to go after his old nemesis again. Doing this will take you through land, sea, and air, traversing all kinds of terrain that will be familiar to longtime Super Mario fans, but all newly arranged into newly designed levels that even die-hard fans of the series will find challenging.

In contrast to most Super Mario fanmade games that just "rip" graphics from the originals, graphics in Mario Forever is much more polished, full of crisp SVGA details that are much better looking than in Nintendo's original 8-bit games. There is plenty of secret areas, monsters, and surprises along the way. My only complaint is that the English in the game is quite bad - the text reads like it was plugged directly from Babelfish translations. But since English is not the designers' native language (they are Polish), we should be content enough that English option is available at all... playing Mario in Polish would have been a unique experience indeed ;)

Mario Forever does justice to Nintendo's blockbuster franchise, and stands as a testament to how good fanmade games can be, given genuine love of the original and a lot of effort. Aside from being very good looking and addictive, the game is also just about as long as a real Super Mario game - meaning it will take you many hours to finish. Highly recommended to every platformer fan.

Since I was a little kid I remember playing the Mario games and this is one of the coolest ones I have played. I have always liked the 2d versions of Mario because it is simple and really fun. Although this game does not have yoshi who was my favorite character it still has the classic Mario.

I would recommend this game to who ever pretty much likes the mario games. Some of the best action in this game is the turtles and the tube running if you like extremely action packed games this one is definitely for you but if you are more of a classics type gamer you will love this. And I am pretty sure you have played this game if you like the classics any way.

The colors and graphics and controls are great in this game. The only thing I don't like about this particularly game is the lack of boss battles.

I would recommend this to anyone who enjoys playing the Mario related games from the past and present. I had trouble getting the gamepad to work properly but the keyboard controls really were very good once I got used to them. This game also has awesome sound effects and music just like the original! Graphics are just like the classic Mario game! If you are not looking to gain weight then do not get this game because all you will do is sit there and play and play and play and play. Trust me this is one of the most addictive games I have played in my entire life.

The graphics have been updated with new animation effects but still have the old flavor of mario. The gameplay is just simply amazing, the game has several worlds and each world has few own unique levels just like most of the original Mario games. Few secrets and few more special stages have been added though.

Still this game is amazing and I strongly recommend giving this game a try, it is amazing. This brings back the good old memories of the gaming. And creating own levels is awesome. This is a fun free game to play. 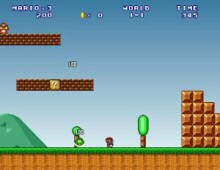