Although Nintendo never made a PC port of its console-only blockbuster Super Mario Brothers, PC gamers have access to many unauthorized "PC versions" programmed by zealous fans. SouthPark Super Mario Brothers is one of the better releases that should please both Kenny's and Mario's fans. This Enhanced Edition features bigger and more worlds that go beyond those in the original console classic. Your task is simple: help Kenny and other pals from South Park save the Princess by bouncing, kicking, and running through dozens of levels populated by malicious stumpy monsters, mushrooms, and -- of course-- Bowser. You control Kenny using the arrow keys, and SHIFT key to jump. You will bounce on boxes to collect coins and discover power-ups, and extra lives are gained when enough coins are collected. Bonus levels offer more coins, and there are secret rooms to discover. When you get to the big bosses Bowser or Mr. Garrison, you will have unlimited continues, and now have firepower ability by pressing the CTRL key. As in the console original, Bowser is very easy to defeat if you study his patterns. The South Park character Mr. Garrison, on the other hand, is a big challenge-- you basically have to shoot him dozens of times before the fight is over.

With good graphics and a very authentic feel (even soundtrack!) to the Nintendo classic, South Park Super Mario Brothers is one of the best "unofficial" PC versions ever made, and offers many hours of platform fun. 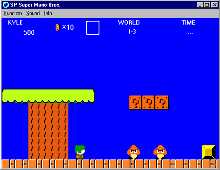