Super Mario Pac is one of the best Super Mario clones for PC you will likely find. This is not only because it remains faithful to the simple-yet-addictive gameplay of Nintendo's blockbuster, but also because the game adds new twists that won't make fans feel like deja vu, while attracting new fans to the franchise.

Super Mario Pac looks exactly like Nintendo's game, but plays quite differently. Instead of the platform action, the game is a one-screen-per-level game that combines the gameplay of Super Mario with Jetpac, a classic Spectrum ZX game (of which you can download the freeware PC remake on this site). Like the jetman in Jetpac, Mario is now equipped with FLUDD, a cool water cannon that can thrust him into the air with water power. On each screen, your goal is to collect and assemble Mario's pipe escape route and poison any plants in his way. Like the jetman's jetpack, the FLUDD water cannon can be used to drench the attacking enemies - but it must be refilled once in a while before running out of water. The jump-and-bump gameplay in Super Mario are so well suited to the fly-around-the-screen action of Jetpac that it's a small wonder nobody has thought to combine them until now. Whether you like Super Mario or Jetpac or - more likely - both classics, you will enjoy this excellent fanmade remake. 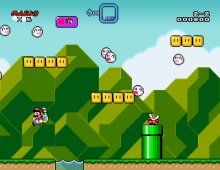