The first game based on a hot TV cartoon series of the same name from Konami is a fun, but frustrating, platform title that mixes top-down view with standard side-scrolling action. Practically every adolescent boy that owned a Nintendo has at least played this game. In the overhead scenes, you explore the level, watching out for foot soldiers or street cleaners that can plow you over. Once you enter a building or a sewer, the action switches to a typical side-scrolling view.

There are many levels (i.e. buildings you can enter) in the game, each with its own little goal. For instance, your mission in the first level is to rescue a reporter friend of our Ninja Turtles, April O'Neil. Other levels require that you defuse bombs by a dam, or rescue the Turtle's van, for example. Although there is no multiplayer support, you can switch between each of the four turtles at any time. If a turtle runs out of life, they get captured by the enemies and disappear. You'll then have to control another turtle and find the imprisoned friend somewhere on the same level. As with the cartoons, every turtle has his own characteristic weapons: Leonardo has a quick sword with a wide range, Donatello has a powerful but slow Bo, Michelangelo has quick nunchuks, and Raphael posseses almost useless Sais. There are also other limited weapons to be found, such as shurikens, scrolls that shoot out waves, etc.

Despite a good variety of monsters, weapons, and missions, gameplay is severely imbalanced. There are always so many enemies that in some areas it's impossible to get past them without getting hit. There are also many jumps that require that you get to the precise edge of platform and jump with the precise height in order to make it to the other side. If your reflexes are not superhuman level, this is very difficult to do. In short, Teenage Mutant Ninja Turtles loses its appeal after you've failed to make that darn crucial move too many times. If you're not a joystick expert, stay away from this one, or play the much more forgiving TMNT 3: Manhattan Missions instead.

Teenage Mutant Ninja Turtles is a sidescroling platform game, where you have to complete some scenes, for example rescuing April from a burning house packed with enemies, destroy Shredder and his army, get into the Technodrome, save Splinter and more. At the end of every level, you will have to eliminate the 'Boss'

If you liked The Simpsons Arcade Game you'd surely like this one, which has the same concept.

You can choose to play with any of the 4 turtles, each one equipped with it's own unique weapon. The game supports both single and 2 players gaming.

The game is quite fun when you play it with a friend, game controls consist of keyboard and joystick. 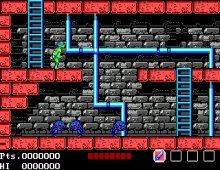 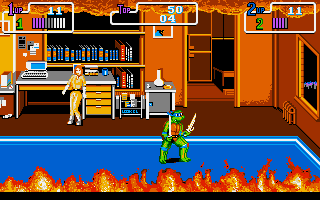