This is the game that started the whole Mortal Kombat trilogy. This game is known world wide, and if you haven't played it before.. well, you should! You are entered in a tournament, and must fight the way to the top. It's a do or die situation, kill or be killed. My favourite player in this one, and throughout 2+3 as well, would have to be Liu Kang, although, a fellow person on IRC doesn't tend to aggree with me ;-) "every character sucks except Sub-Zero" :)

One of my favorite fighting games ever made. And one of the few with a little story in the game as well. You are one of several competitors in a tournament where you fight for your life. Each round is a fight against another opponent and the two that survive until the last round will have to fight for their survival.

Each character you can choose from has several unique and different movements that the rest of the characters which makes this game very good. A lot of blood are included in this game which gives the "correct" atmosphere in the game. Download this goodie now!

One highclass fighting game. You fight this tournament of Mortal Kombat with the prize being your continues existance. A fight for your life. You got 7 fighters to choose from - my personal favorites being Rayden and Sub-Zero. All got their own strengths and special attacks (like Sub-Zero being able to freeze his opponent, Scorpion shooting some kind of harpoon etc.). Because of my old 2 button joystick I have some trouble getting these special moves to work reliable. And well, in my opinion the game relies on those attacks too heavily sometimes (esp. scorpion can turn a fight by just shooting his harpoon twice). So why do I prefer Rayden and Sub-Zero? They both got strong punches and the punch-button is my main joystick-button. Well, it's easiest for me to punch opponents into the ground. If you don't have that limitation Liu-Kang is also pretty good.

The tournament starts with you fighting all the other 6 fighters and last... yourself! Yes, that's right, you are mirrored and have to fight yourself. I found it especially hard to defeat myself as Rayden (although I don't have so much of a problem defeating him with the other chars). The hard part begins after these duels - you get to fight two other fighters one after another (without your health being restored in between). If you manage to get past these fights (to my own shame I have to admit I didn't) you will be facing Goro, undefeated champion of Mortal Kombat and bodyguard of emperor Shang Tsung, who will be your final opponent.

This is the first action game for quite a while that's been able to hook me for hours and hours. The fight scenes are very realistic (for its time) - they were filmed with real actors and digitized for the game. Just a final warning - this game shows a high level of brutality, it is not suited for children. 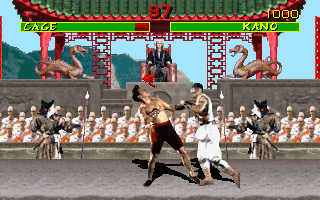