A nice Hack 'n Slay - you choose your character from either a Warrior, an amazon or a dwarf. Now you set off to defeat Death Adder who murdered half of your relatives. Use your weapon or magic against those who try to prevent you from your revenge. Once you get familiar with the controls this one is quite enjoyable - you need to react quick, but the fights are fair - more or less, you just need to watch that you don't get between two enemies - that usually ends bad. ;)

A good game to kill your agressions, well done while I wouldn't regard this as a Smash-Hit. You can still see that this one was first designed for consoles (Master System & Sega Mega Drive).

Decent conversion of SEGA's smash hit arcade beat'em up Golden Axe... decent for PC standards of that time, that is. At least the VGA graphics are faithful although gameplay is far inferior to the original.... "Inferior" is a relative sense, though-- if you have never played the arcade original (or SEGA Genesis version), you won't be disappointed with Golden Axe's addictive arcade fun despite a few cases of "sticky controls" problem.

In Golden Axe you can choose to play as one of three characters, with each having their own characteristics. Gillius Thunderhead has great attack power but little magic, Axe Battler the Barbarian has average attack and magic skill, and Tyrus Flare has great magical power but weaker weapon attacks. Each character has standard attack moves where successive hits on an opponent generate a "combo" of several different attacks. Your characters also have a rear attack, a charging attack, a throw attack, and a jumping attack. Each character has a magic meter of various length which can be powered up by collecting "Magic Pots" dropped by elves that you smack with your sword at various points in the game. At various points in the game you encounter enemies riding on "Bizarrians" such as Dragons. You can knock the enemy from the beast and ride it yourself, which gives you access to the beast's attacks until you are yourself knocked from its back by an enemy.

Overall, Golden Axe is fun in a 'classic' old-school sort of way. The setting, enemy and character design, music, pace, and gameplay are all very good and help to elevate it above its 'standard' gameplay and a banal fantasy plot. If you have played other versions of the game, you might be a little disappointed, though.

Rescue the King, his daughter and a golden axe whom where stolen by Death Adder. Concluding: Kill everything on you way with this plafform beat 'em up game. 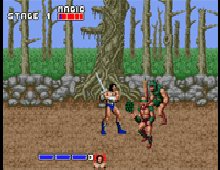 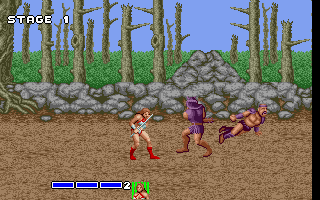