Gauntlet 2 takes off where Gauntlet 1 left. There aren't any obvious changes other a few improvements in the graphics a few places as well as new levels and monsters. You start the game by selecting between 4 different characters you want to play as. The choices are a male fighter throwing axes, a female warrior throwing swords, an archer shooting arrows and a mage casting fireballs. Of course this doesn't have any effect but it's a nice idea.

The reason why Gauntlet got so popular was that it offered so many new things within the action arcade genre and even more with this sequel. It isn't just about shooting monsters but also to collect gold, keys (in order to get access to different places on reach level). You can also collect different thing that makes you fight faster and become invisible as well.

By offering a very simply gameplay with many small features as well as tons of levels (there are more than hundred levels in the game) you have a winner and even today it does better than many of those poor excuses of an action game. Of course you can also play two players at once which make the game easier as you can't really fight against each other. A classic game that really has to be tried.

Gauntlet II - the game got even better! It's basically the same concept like in the first part. You play with up to 4 human players at the same time - each choosing his (or her) character from one of four possibilities, a warrior a valkyrie, a mage and an elf. I haven't been able to find any differences between those 4 except the way they look - ok, the warrior throws an axe while the elf shoots arrows, but the effects are the same. I remember playing this game on my C64 with a friend for hours and hours and still - when I played Gauntlet 2 again last night after a long time I got hooked for a longer time than I should have played into the night. But who needs sleep when there are monsters to fight? This game is more than just a simple hack 'n slay - there are quite a lot of adventure elements in the game - for example you can go the first way you see to get out of the level or you search around more and find another key you use to open a door, find some treasures, fight some monsters, find another key and - wow - what is that?! - yes, an exit that promotes you 5 levels further. You might have needed twice the time to finish level 1 than needed, but this made you skip some other hard levels - there are often those seemingly easy ways while the hard way proves better in the end. You find some stuff on your way - potions and so on.

Simply put this game was a masterpiece of its time. It's a definite must and even today it ranks high in playability.

MobyGames description of this excellent sequel to Gauntlet: "Based on the arcade game, Gauntlet II is very similar to the original. Up to four players (a wizard, a warrior, an elf, and a valkyre) make their way through various mazes, collect treasures and magic potions, and fend off assorted creatures and ghosts."

Although it is true that Gauntlet II has almost identical layout as the original, some new, interesting features have been added to make gameplay a bit more complex. There are health-draining force fields and new monsters such as sorcerers, blobs of acid, and a black monster that homes in on you and saps your health. The levels also start changing randomly after level 5. Less important is the ability to choose what colour you want your character to be, and if you're playing with a friend, it's now possible for both of you to choose the same character. The graphics and sound effects are just as good and the game is as good as, if not better than, the original. In short, if you like Gauntlet, you will definitely love this underrated sequel. A great game to play with friends huddling around the same computer :) 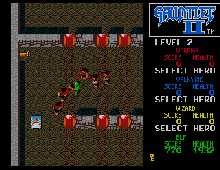