Gauntlet must be one of the games I have played the most of you add the time from all systems including those arcade machines that were once so popular standing at different places. You start the game by selecting between 4 different characters you want to play as. The choices are a male fighter throwing axes, a female warrior throwing swords, an archer shooting arrows and a mage casting fireballs. Of course this doesn't have any effect but it's a nice idea.

The reason why Gauntlet got so popular was that it offered so many new things within the action arcade genre. It isn't just about shooting monsters but also to collect gold, keys (in order to get access to different places on reach level). You can also collect different thing that makes you fight faster and become invisible as well.

By offering a very simply gameplay with many small features as well as tons of levels (there are more than hundred levels in the game) you have a winner and even today it does better than many of those poor excuses of an action game. Of course you can also play two players at once which make the game easier as you can't really fight against each other. A classic game that really has to be tried.

Okay, first I got to admit that I didn't really got this game to run properly on a newer computer. So I mostly got to rely on my memories of my good old C64 days to describe this game. You can play with up to 4 players at the same time (on one keyboard *coughs*) - you can choose your character to either be warrior, valkyrie, mage or elf. Apart from their looks this doesn't really have an effect though. The warrior throws his axe, the mage throws spells - you can imagine...

But anyway - this game is quite good. There are MANY levels to go through, many monsters to fight and overall it's just great fun. It was definitely above standard in its time - well... more than just above - it SET new standards. There's more to this than just hack 'n slay - you got to find keys to open doors and often you can either take the (easy to find) exit taking you to the next level or go the longer way and find an exit getting you 5 levels further.

The multiplayer option is a nice thing - but let me advice you - do not try to play with more than 2 players at the same time.

MobyGames entry says it all about one of the most celebrated arcade games of all time: "Gauntlet, the original arcade smash hit, is fighting game where you choose a character a let rip into the hordes of enemies that assault you on you way to the end of the level. It featured a choice of four characters to play with, each with different weapons. Thor the Warrior, with his bludgeoning battle axe. Thyra the Valkyrie, with her close range sword. Questor the Elf, with his long range bow. And Merlin the Wizard with his magical bolts. You (and another player) must make your way through 100 levels of mayhem and magic. Ghosts, goblins and even the life draining Death are your enemies. They stream out of generators. Destroy the generators first before tackling the rest. Find keys to help you progress to the exit. Battle your way past ghosts, ghouls and a wide variety of evil monsters using magic and potions, as you desperately try to escape before your health runs out. Look for scattered magic potions. These act like smart bombs and clear the screen of all enemies. Beware of poison though. Treasure is abundant throughout the levels and adds to your score.

[This downoad] is a faithful conversion of the classic multi-player arcade hit. Both graphics and sound here are delightful and once you get into this game, many, many hours can be lost!" Definitely one of the best multiplayer games ever made, and a great action/RPG combination that is a must-have for ever arcade fan's collection. Highly recommended!

The first game I ever played on C64, although this is for PC. It was cool, I even still have the cassette at home that still works in my old Amstrad. Hehe, you would think I was a fanatic. I get déja vu when I play catacomb because of this game! It was an excellent foundation layer for the dungeon crawler games though.

This game has multi and single player. You pick your own character, and the others pick theirs. When you start this game you chose from the following four characters:

Thor the Warrior: He's the big man. Takes a bit to knock him out, but he doesn't have any special magic powers. He also moves a bit slow.

Merlin the Wizard: Touché! Well, you couldn't very well have a Wizard and not call him Merlin I guess! Merlin is a cool character, he has strong magic abilities, and can kick some arse. He cant really do much when he's being hit on the head, as he's a very fragile character and its better to kill everyone around you before they get too close and smack him.

Thyra the Valkyrie: This was the character that I always used. I guess that's because I am a girl =). She's tough, she's powerful, has magic. Plus she looks dang good in a skimpy costume! What more could you want? She moves relatively fast and has the best of all the characters rolled into one I think.

Questor the Elf: He can use magic, and can hit people pretty hard. But he's pretty fragile again, and his best characteristic is that he is the fastest. Which is good when you need to get away as he's got stuff-all armor. But when surrounded with nowhere to go, who you gonna call? ;)

This game is great, you go through many levels, gathering treasure and potions and killing the dungeon monsters. It's so much fun. There are many dungeons to go through, and if you've played Catacomb, then you'll pick this game up really easy, as this game inspired all like games.

I guess the one bummer is when you are playing multi player and you get caught in different screens and get stuck, as the screen just isn't wide enough for you both to go back and get together again! That used to cause a lot of resets when Sarah and I used to play it!

You MUST download this game and play it. It's excellent and totally rocks hard! I love it! 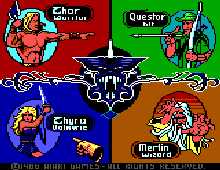