Zelda Classic is probably THE most faithful PC conversion of one of the most famous NES classics ever made. For those who've never played console games, Legend of Zelda, released by Nintendo to worldwide fame in 1986, is an incredibly addictive action/RPG hybrid that tells a story of a young adventurous boy named Link, who is always busy embarking on life-threatening quests. Not only to save his world, Hyrule, but also to rescue his beloved princess Zelda. As if that isn't enough for a hero's work, Link must also prevent the evil Ganondorf Dragmire, king of thieves, from getting that Triforce, the mysterious artifact that grants anyone's wishes.

The game is played from a top-down perspective similar to most console RPGs of yore. What sets Zelda apart from others is not only the evolving, intricate plot, but also a great balance of action and RPG elements. Link not only must talk to NPCs and gain experience like all RPG heroes would, but he has to push boulders, kill monsters in real-time, defeat devious traps, and in general solve a multitude of ingenious physical puzzles (i.e. how to get from point A to B) that are put in his path. You'll have so much fun with the game that you'll hardly notice it's 4 in the morning (and you have 3 hours to sleep before rushing to work). Zelda Classic is an excellent, albeit unofficial, conversion of an NES classic. Now, for the first time, PC gamers will have a chance to experience why Zelda continues to be a very strong, very popular console series.

Zelda Classic is by far the best PC conversion of the legendary Legend of Zelda, a Nintendo classic played and enjoyed by everybody. This classic action RPG tells a story of Link, an elf hero who is always looking for challenging quests. As the game advances, Link learns about Ganondorf Dragmire, king of thieves who threatens the world with his search for an ancient wish-granting artifact. Who else but Link can save the world (and a princess... along the way)?

A classic top-down view, thousands of monsters, dozens of puzzles and great balance of action and RPG make Zelda Classic a top game. Enjoy it!

Note: There seems to be a slight problem with the installation proccess. After you install the game, go to the top menu and set-up the QUEST DIR to make the game work!

Perhaps it is the nostalgia evoked by that familiar theme. Perhaps it is the thrill of adventure experienced when exploring a dungeon and fighting back bats, skeletons and a myriad of other nasty creatures. Perhaps it is because this game defined a genre and set the standard for future RPG games to follow.

Regardless of which of these holds true for you, this game is a great classic that should be considered a rite of passage for any serious gamer or dedicated Zelda fan. You play the character Link who quests to save his land and the Princess Zelda from the evil force (all in all, the story is very similar to that of Mario, another classic). As Link, you search through the high mountains to the lowest of Dungeons, collecting many items that can be used to help you to continue on your journey. While the graphics and the music, can at times get repetitive and slightly annoying, those trivial details are soon forgotten in the joy of fighting a boss and winning, discovering a fairy, or finding a key item.

For the game playing era it was released it, this was the cre`me ala cre`me, a vast world filled with numerous puzzles (some notoriously difficult and practically impossible to solve without outside assistance, but once you did, came that undeniable feeling of accomplishment and pride), dungeons (delightfully dark and sinister) and many monsters and bonuses that could ensure many repeated visits back to the Nintendo set.

While by current standards the game is slow, linear and "technologically deficient", to many these are the very features that ensure its spot in the pages of history. Zelda was attractive without being loaded down with the "bells and whistles" of the modern gamer's world. In the truest sense of the word, it is a classic.

The game's story may not be the most complex or moving, but it is the idea that this was the beginning of the Zelda franchise that keep people coming back for more. It was thing game that was such a success that it allowed Nintendo to create other later Zelda masterworks. For what it is and what it was, overall this game is top notch, very replayable, and very enjoyable for the most advanced RPG veteran to the most clueless newbie.

This is a game that is enjoyable for everyone. This is an accessible and entertaining game for all ages at any time. 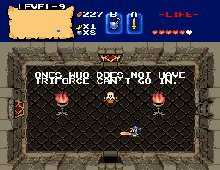 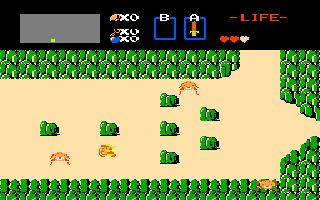 People who downloaded this game have also downloaded:
Ultima IV: Quest of The Avatar VGA, Dungeons & Dragons: Warriors of the Eternal Sun, Eye of The Beholder 1, Oregon Trail Deluxe