Eye of The Beholder 1

Westwood's Eye of the Beholder 1 and 2 remain today two of the best real-time RPGs ever produced. They feature great graphics for their time, tons of cool weapons and devious real-time puzzles that mysteriously make you come back for more traps and pressure plates to push. The plots are typical kill-the-big-foozle fare, but the games are so well implemented that you'll be glued to the screen for hours on end. The graphics and animations are both top-notch, and excellent sound effects add to the incredible "you are there" atmosphere that is rarely achieved in RPGs of that time.

Although EOB 2 feels at times like a poor rehash of its predecessor due to awfully similar graphics and monsters, it does feature more expansive and varied outdoor levels, as well as less frustrating endgame boss (defeating the Beholder in EOB 1 is nearly impossible if your party is not at maximum levels). They're both very challenging games that are definite must-play for dungeon-adventurers, especially fans of book-based AD&D. Too bad SSI's own EOB 3 doesn't measure up to these classics.

Advanced Dungeons and Dragons game. Very cool series of games. This is the first one. A good RPG with excellent graphics and sounds.

This is a Classic RPG that takes me back to long nights with friends thinking up spells and eating many "Screemer Slices". I have been looking long and hard for this game to replay and to one day complete the game. It takes several days and hours to play this game due to its complex levels and puzzles. Cheats are highly recommended to limit the hair-pulling and sleepless nights (and your parents will appreciate it too.)

The game begins by having you select your heroes and naming them. I don't believe there is any logic behind the naming of your heroes but be creative. You will have a choice of warriors to wizards. A good mix is recommended to allow for variations to your game play. After selecting your heroes of four you will begin your journey into the depths of the dungeon.

Your heroes will be placed in pairs, two in front and two in back. Place the warriors or stronger heroes in the front and the weaker but more skilled long range heroes in the back. Wizards or warlocks are to be in the back to allow for their strong ability to cast spells and for their weakness against direct monster blows.

As you travel through the dungeon you will go through doors which will lead you to either another door or stairs or dead-end. As you go you will find equipment and food to eat. Take what you can and then swap out things are you don't need them. Food is highly recommended since you will be in the dungeon for days, or if you are anything like me, Years!!! There are many puzzles to solve, buttons and levers to switch, holes to look in and pits to go around as you find your way to the end. I have not yet successfully escaped the Eye of the Beholder. But it is an awesome classic.

I recommend this game to those of all ages. Its learning curve is simple but its challenge is high enough to encourage even the best dungeon master, if they still exist. 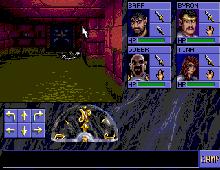 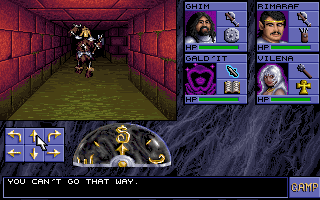 Eye of The Beholder 1 screenshots