GameSpot's nice History of AD&D gives a good overview of Pools of Darkness as follows: "The fourth and final installment of the Forgotten Realms gold box series, Pools of Darkness, set the stage for your party's adventure into the lair of an evil god. New Phlan was magically ripped from its foundations and dragged underground to the city of dark elves. The peaceful residents of Phlan, the Dalelands, and the surrounding areas of the Moonsea were forcibly kidnapped and pressed into slavery in service of Kalistes, the spider-priestess of the god of evil, Bane. It was up to the player to defeat the dark elves and their arachnoid allies, free the slaves, restore Phlan to its natural state, and eventually defeat Bane himself.

Pools of Darkness followed its predecessors closely in terms of structure; players formed a party of six adventurers (with two extra slots for NPCs), that had the ability to advance to the lofty heights of level 20 (with access to spells of tenth level). However, the scope of the game was decidedly different from its predecessor. Combat in the game, especially later on, differed greatly from the encounters of the previous games. Your characters faced some of the toughest creatures in the AD&D universe, in addition to a number of new and formidable critters created specifically for the game, including the venomous Pets of Kalistes and the terrifying Minions of Bane (which had the magic resistances of demons and the breath weapons of dragons)."

Pools of Darkness is the fourth in a four-part series of Forgotten Realms Dungeons & Dragons Gold Box adventure computer games. The party starts their adventure in the city of Phlan, charged with the task to safely escort Council Member Sasha on a diplomatic mission. Upon leaving the city, Lord Bane, along with four of his lieutenants, claims the entire land of Faerun as his own, and magically teleports, destroys, and removes many cities off the face of the land... 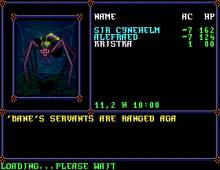 People who downloaded this game have also downloaded:
Pool of Radiance, Curse of the Azure Bonds, Secret of the Silver Blades, Champions of Krynn, Dark Queen of Krynn, The