Secret of the Silver Blades

GameSpot's nice History of AD&D gives a good overview of Secret of the Silver Blades as follows: "Secret of the Silver Blades, released in 1990, was the third installment in the Pool of Radiance saga. The game took place away from Phlan and the Dalelands; unfolding instead deep in the heart of the wintry Dragonspine Mountains. The player found his party summoned to a tiny mining town by the power of a mystical magic well to battle a great menace. A mysterious cult of spellcasters called The Black Circle has been hard at work reviving a powerful and evil lich known as the Dreadlord. It's up to the members of the party to seek what few members of the Dreadlord's sworn enemies, the Silver Blades, still exist, and ultimately take up the banner of the Silver Blades as their own in battle against the Dreadlord and his Black Circle minions.

Secret of the Silver Blades stayed true to its predecessors in the series, offering much in the way of expansion on the old and little in the way of brand-new material. Characters were allowed to advance to 15th level (18th in the case of thieves) and clerics and magic-users were allowed access to spells of up to seventh level."

Secret of the Silver Blades is the third in a four-part series of Forgotten Realms Dungeons & Dragons "gold box" adventure computer games. The party's objective is to adventure through the mountain region near Verdigris, entering areas such as the ruins of Old Verdigris, the Well of Knowledge, the mines, the crevasses, and eventually to the Dreadlord's castle. The party will face off against an evil group of humans called the Black Circle, many kinds of monsters in the mines and crevasses... 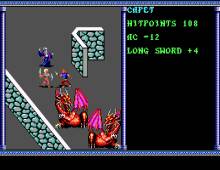 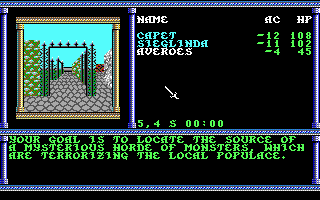 Secret of the Silver Blades screenshots

People who downloaded this game have also downloaded:
Pools of Darkness, Curse of the Azure Bonds, Pool of Radiance, Champions of Krynn, Treasures of the Savage Frontier