GameSpot's decent short review of Champions of Krynn goes as follows: "The first proper Dragonlance computer role-playing game, Champions of Krynn (released in 1990) took place shortly after the War of the Lance in the Dragonlance timeline. A routine scouting mission into the smoldering ruins of the town of Throtl became a desperate struggle to rescue the kidnapped Caramon and a troupe of human captives from a small squadron of Draconians. From there, the action escalates from town to town across the continent of Ansalon, as the party is led by knights, kender, enemy traitors and actual characters from the Dragonlance Chronicles in an effort to quash the attempts of evil forces to corrupt dragon eggs into armies of Draconian warriors.

Champions of Krynn took the blueprint first set by Pool of Radiance a few steps further with the help of some additions specific to the Dragonlance world. Specifically, Champions featured the hoopak-wielding Kender race, the Solamnic Knight character class, and the steel-coin currency specific to Krynn. It also introduced some interesting modifications to the magic system. That is, certain magic-user spells were categorized into different schools according to a character's alignment (for instance, the Globe of Invulnerability spells were only available to good-aligned, or white mages, while Fire Shield and Dimension Door were only allowed for neutral-aligned, or red mages). Also, bonus or penalty spells were assigned based on the cycles of Krynn's three magic moons. Finally, clerics were able to choose their deities, which, true to the Dragonlance universe, would endow them with innate special abilities, like the additional healing ability of followers of Mishakal, or the enhanced turn undead ability of followers of Majere."

First RPG in Dragonlance land. If you read the books, you know what I'm talking about. After the War of the Lance not all evil was extinguished. Your party goes northeast of Ansalon....

From a company, whose very name states they are dedicated to making strategic games comes an RPG trilogy about Krynn. All who are familiar with the advanced dungeons and dragons surely recognize this place!

The first game in the trilogy is Champinos of Krynn. As an adventure campaign the game is set in a land with Dragons and Magic, both evil and good. A small band of adventurers must stride forth and discover the reason for remaining evil in the Section of Northeast Ansalon. Rumors say that the dead evil queen Takhisis stirs. Your first objective is to discover what has happened to the Commander of the Outpost, Caramon within the Hobgoblin Fortress of Throtl.

You will encounter monstruous creatures, Giants, Dragons, Draconians, Goblinoids, Armies of Undead, Humans, Elves, Dwarves and Kender. The path is treacherous and strewn with magical goodies. The Lands of Ansalon have but one mighty defense against the evil dragons, the DragonLance. Dragonlances, when striking a Dragon, does damage equal to the wielder's hit points. The small and curious Kender have their own weapon, a Hoopak.

But the very first thing you need to do, it to create your party. You can have up to six members in your party (although one is enough). First off you chose the race, gender, social status and attitude of the character. Next you decide upon the attributes the character has. You don't get to assign points, but you can keep repeating the random distribution until you're satisfied with the attributes the character has (you'll understand what I mean when you start the game). But you do get to choose the looks of the character. The characters are icons that you see while in combat mode and you can decide how they will look like (actually you just get to combine some pre-prepared looks and assign colors to them). This is a fun, but fairly useless feature. It only helps you distinguish your own men easier while in combat.

After creating a character you should save it, because otherwise you can't ad it to a party. You can create as many characters as you want, but you can only select up to six (although one is enough). I do suggest you make your party as big as possible, because it does mater in the fights if you are alone or you have some comrades to help you fight the opponents.

When you go on your venture, you'll quickly get involved in the first fight. After winning a fight (if you lose it doesn't matter anyway) you get some spoils of war and the party members get important experience points.

As with most RPGs the more points your characters have, the stronger they are! Depending on your choices at the beginning of the game, they also have different skills that will come in handy (from the use of magic, to the stealing skill – but remember, if you selected your character to be lawful, you can't really expect him to steal).

Every now and again you will need to rest. If you're in a settlement that's quite easy (you simply go to the inn), otherwise you need to set up camp first. There are also other buildings in settlements and there you can buy equipment, learn, gather information, etc.

All in all this is a nice RPG game that started quite a successful trilogy. Compared to some other RPG games of that time it may not be as deep, but it is therefore (at least in my opinion) more fun. The game features a solid adlib sound and the graphics are nice with 16 colors (EGA graphics). The game also supports a mouse control, but it's obvious that the keyboard was meant as the primary interface. 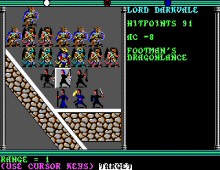 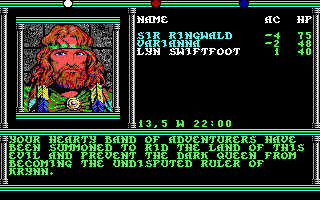 People who downloaded this game have also downloaded:
Death Knights of Krynn, Dark Queen of Krynn, The, Curse of the Azure Bonds, Pool of Radiance, Pools of Darkness