GameSpot's decent short review of Death Knights of Krynn goes as follows: "The second game in the Dragonlance gold box series, Death Knights of Krynn returned players to the world of Dragonlance. The player's characters are in the midst of celebrating their victory over the dragon highlords when the undead specter of Sir Karl, a noble knight who had perished in the previous game, swoops down on the ceremonies on the back of an undead dragon. A cursory investigation leads to the discovery of a growing horde of powerful undead creatures. Ultimately, the party must embark on a full-time quest to seek out and destroy the source of the abomination: the legendary Lord Soth: uber-death knight and possessor of Kitiara's soul.

For the most part, Death Knights of Krynn followed Champions of Krynn to a tee in terms of gameplay structure. The player would select a party of six characters capable of advancing to fourteenth level (18th for thieves) and accessing spells of up to seventh level for clerics and eighth for magic-users. Instead of fighting hordes of dragons and draconians, your characters were instead pitted against unique undead creatures concocted specifically for the game, like undead beasts, undead rocs, and zombie mastodons, as well as hordes of the more standard, garden-variety undead, and a contingent of death knights, including Soth himself." 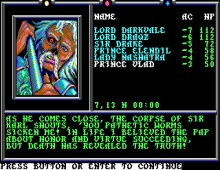 People who downloaded this game have also downloaded:
Dark Queen of Krynn, The, Champions of Krynn, Curse of the Azure Bonds, Pools of Darkness, Pool of Radiance